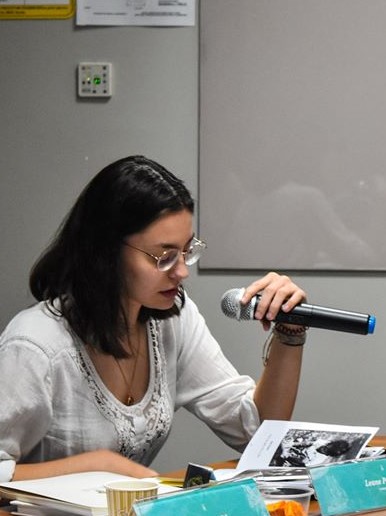 “I try to not just took a photo of what I see, but create art from reality.”

Léane Pouvreau, the 10th AHAW’s fellow for photography, grew up with her father’s camera and has been drawn to photography since her early childhood. Soon enough, it has evolved to become her medium for art and storytelling. Pouvreau’s creative process varies– at times, she relies on recreating photographs she’s imagined in her head and other times, she takes in what’s around her and goes from there. “I try to not just took a photo of what I see, but create art from reality,” she said.

AHAW was able to become a space for Pouvreau to connect with and learn more from seasoned practitioners. Her mentor, Cru Camara, took on a dynamic approach to color in her own body of work, which inspired Pouvreau to work with color more in her future work.

Beyond a means to connect, AHAW was also able to become a space for Pouvreau to re-examine her creative process, particularly with the way she became more open to new subjects. Her series of photographs are part of a larger project of hers about gangs around the world. She shared that her work was prompted by a task assigned in her sociology class about subcultures in Metro Manila. As an exchange student, Pouvreau utilized her semester to learn more about the country’s gang scene– as she’s seen this done before in places like Latin America, Brazil, and Colombia.

She pursued this project with the clear intent to be rid of her pre-conceived prejudices and clichés regarding her chosen community. “I’ve learned a lot [about] photography at a more personal level,” she added, “I think that the sentence ‘Don’t judge a book by its cover’ might be a good summary of this project.” For Pouvreau, open-mindedness was the key to this experience. She recounted an instance where she’s established camaraderie with the gang members and was invited to an anniversary event, “It was a real proof of trust between them and me.”

Throughout her journey as an AHAW fellow– from the workshop up to the culmination of her work– Pouvreau was able to exhibit and experience the power of art to encourage openness and foster human connections.

From the Ground Up: An Exploration on Worldbuilding

With its unique hold and understanding of tabletop games, THINC lends its knowledge on the processes behind its features, how players partake in the story, and how these come together to make worlds come alive.

Today’s Special: Dwelling on the Details

Though food is not immediately recognized as an interplay of literature and art, cooks utilize a creative interaction between narrative and aesthetics with the dishes they serve—and Cess Yu is a notable example.